President of the EIFI celebrates 30 Years at Schneider Electric 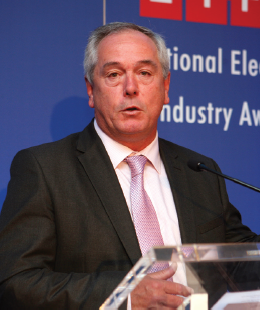 Mark began his career as an Application Engineer at Schneider Electric in 1990. During the following years he has held positions in Engineering, Marketing, Sales and became the VP for Buildings & Industry in 2015.

He has been very active in the wider electrical community, notably in his role as President of the Electrical Industries Federation of Ireland since June 2018, where he heads up the EIFI Committee. The primary role of the committee is to drive and support the Federation’s purpose of providing a forum for professionals to discuss matters of interest to the Irish electrical industry.

Kelly Becker, Country President of Ireland at Schneider Electric: “Mark’s dedication to supporting the electrical industry here in Ireland is both important and admirable. We are very grateful to have someone of his experience and dedication leading our Buildings & Industry business in Ireland – helping our customers with commercial and industrial facilitiesto make them more connected and energy efficient.”

Other highlights of Mr Keogh’s voluntary work include creating the Schneider Scholarship for female students of Electrical and Electronic Engineering. Schneider Electric set up this scholarship to complement and enhance their current involvement with Technical University Dublin (formerly Dublin Institute for Technology) ESTeEM project, by encouraging and supporting female enrolment in engineering courses at the university.

If that was not enough, Mark has also participated in two technical committees for the National Standards Authority of Ireland.